Early in 2020, before the COVID pandemic began, Cody Beish K9HSK started working on an improved version of the .43 repeater.  He assembled the system and tested it at his residence over a period of many months to ensure that it was reliable.

On Saturday, May 29, 2021, several PARA members had difficulty hearing the .43 repeater during the weekly net.  They reported that the signal was periodically getting much weaker and noisier.  The following Monday, I went to the repeater site and checked the RF power level.  It was randomly fluctuating between 13 and 23 watts.  The repeater is designed to put out 50 watts, so it was apparent that something was wrong.

I notified Cody, the repeater trustee, and asked for his advice.  Cody decided that it was time to install the new repeater system.  When I alerted club president Darren Dixon W3DLD to the plan, he also volunteered to help.

On Tuesday morning, we arrived at the site and discovered that the old repeater was putting out only 100 milliwatts.  The transmitter was completely dead.

We spent most of the day setting up the new system, but a technical issue with the existing duplexer required the temporary use of a different duplexer.  The next morning, Cody and I met again at the repeater site and completed the upgrade.

As of this writing, the repeater has been working reliably for a period of two weeks.  Several people have mentioned that the signal is significantly clearer at their homes, presumably due to the increased transmitter power, which is now 70 watts.

Cody is aware of a few minor issues and he is planning to make a few adjustment in the coming days.  The club was really fortunate that Cody had taken it upon himself to build a new repeater system that was ready to go the moment it was needed.

The new system provides severe weather alerts.  It also has the capability of supporting multiple remote receivers.  Cody is planning to install a remote receiver in Philipsburg borough to pick up signals from handheld radios that are too weak to hit the repeater directly.  Additional remote receivers could be added in the future in order to increase the effective service area. 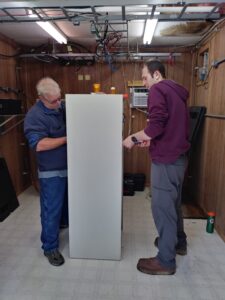 Darren and Cody install the components into a 19-inch rack-mount cabinet. 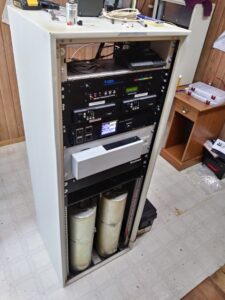 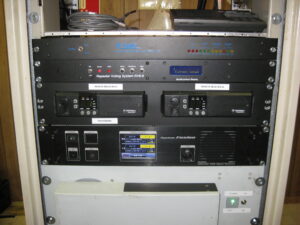 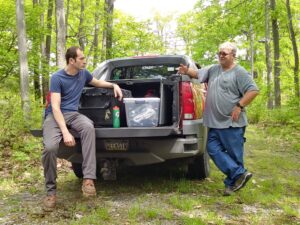 Cody and Darren discuss the project while taking a short break. 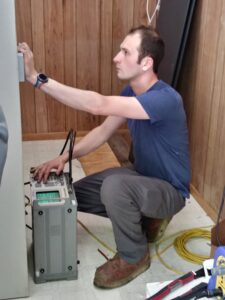